Teaches students and others the role Johnstown and the Laurel Highlands played in the historic happenings in our region since its citizens landed on our eastern shores and set their sights on a westward migration across this great nation.

Johnstown, with its canals and waterways that connected to the East, was the last stop for supplies on the westward migration and the gateway to the west that helped to build Pittsburgh, Ohio and other westward regions in the young days of our country.

Thousands of immigrants traveled to the United States to escape famine, persecution and other difficulties in Europe and Asia and settled in the mountainous regions of the Laurel Highlands.  Mountains that reminded them of the homelands they had left behind.

They settled within their ethnic communities within the community of Johnstown.  Building their own churches and places of worship that became the center of their lives as they worked and established the most prolific and productive industry in the world right here in Johnstown — steel.

There are many stories – of the Revolutionary War, the Civil War, life in the country, life in the city, hardships that were endured, freedoms that were instilled and the joyous celebrations that shaped our culture. 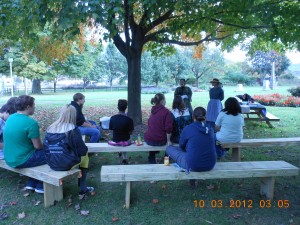 Join us for the Hometown Roots – Stories of the Laurel Highlands Historic Speaker Series and learn more about our fascinating local history.

Sessions are held each summer in outdoor classroom settings at Sandyvale.

Dates and times will be posted on this website.